This is how I would describe the 2016 ONA series Planetarian. Based on the Key visual novel of the same title, Planetarian tells the story of a lonely robot and a man who has all but given up on life. Spanning only five episodes, this short series packs an emotional punch in about your average film’s runtime. It may not be the strongest Key work to date, but it certainly leaves an impact.

For those unfamiliar, ONA stands for Original Net Animation. This is the first ONA I’ve ever watched to competition, and I’ve got to say that I was impressed. Not having to be held back by the standards for TV anime, Planetarian is able to do something fairly unique by adjusting each episode’s runtime. Some are on the short end at around the 10 minute mark and others are closer to 20 minutes in length. This keeps the pacing and storytelling tight and engaging for Planetarian’s entire runtime.

I was so engaged that when I finished the fourth episode I was surprised to discover I only had one left. I didn’t want the experience to end. However, I’m getting a bit ahead of myself. Let me actually talk about the story first.

As I mentioned earlier, Planetarian is the story of a lonely robot that works at a planetarium. Unfortunately, a horrible disaster has left the world as we know it in ruin. It constantly rains and people are unable to see the stars at night. Modern amenities are practically non-existent and people struggle just to get by. Enter our unnamed protagonist. Occupation in the apocalypse, Junker. He basically scavenges ruined cities guarded by killer robots in order to get by in life.

He’s miserable. His life has no real meaning and all he wants is some booze to numb himself with. Needing to escape some killer robots, our protagonist ends up at the planetarium and that’s where the story begins.

Right away the atmosphere of Planetarian is desperate and lonely. You’ll likely be washed over with a sense of melancholy as the driving rains endlessly pour onto the broken and abandoned city. Even in the planetarium, which is largely left untouched and has power, only adds to this desolate feeling. Loneliness permeates the entire first episode.

The robot girl, Yumemi, dutifully performs her job despite the fact that no people will ever visit her planetarium. Greeting the empty halls and streets. She is too as alone in this world as our protagonist. Even when the two meet, this feeling never escapes. It’s very sad in truth.

This was the moment I was hooked. From here the robot girl never shuts up and the protagonist just wants to leave. However, he is compelled to stay and view the show that the Yumemi offers him. Unfortunately, the projector is broken. He decides to repair it.

For the first half, this is what’s going on in Planetarian. It’s simple and direct. Everything culminates in episode 3 with one of the most fantastic sequences I have ever seen in my life. It’s not a particularly fancy or elaborate sequence, but it is special. Words don’t do it justice, you really need to see it for yourself.

The latter half of the show is our protagonist trying to leave the city and convincing Yumemi to come with him, despite that being against her programming. Of course if you’ve seen a Key show you probably know where this ends up going but that doesn’t take away from how well it is all done.

Having only two characters (really, there are a few more) you get to know the cast intimately in this short anime. Our protagonist the Junker is voiced by David Matranga, who you may recognize as Todoroki in My Hero Academia’s English dub. He sounds a lot like Crispin Freeman’s Kyon here which is just perfect. Since he is an annoyed apathetic character at the start, his entire character is told in just his tone of voice alone.

Of course, he can sound caring and understanding too. This is eventually the way the character leans, but the performance is really spot on. In case you couldn’t tell, I watched this dubbed on VRV via the Funimation channel. A sub version exists but apparently in no place I have access to, not that I would seek it out.

Jill Harris voices Yumemi, and while not as strong as David’s performance, you can really get the naivety and child-like nature of Yumemi’s character. You may recognize her from a series I reviewd, Rampo Kitan, since she voices the main character, Kobayashi.

Seeing these two play off each other is a real treat. Fortunately, the two meld together extraordinarily well which is good as this would kill the entire anime otherwise. Due to this chemistry, when the conclusion comes it is quite impactful. I’ve spent well over a week thinking about this show and that’s why I’m writing about it now.

Speaking of the conclusion, it really resonated for me. The protagonist, despite everything, is able to recapture his hope for the future. Sure, things play out in typical Key fashion but it was all handled about as well as anyone could hope. It didn’t feel drawn out or overly sappy. Plus that after-credits scene is the icing on the cake, well done indeed.

I’d like to take a moment to mention that the final two episodes feature some pretty fantastic action sequences. Most of Planetarian is slower and intimate, but it occasionally breaks from that when dealing with the reality of the world instead of the dream-like planetarium. The killer robots have interesting designs akin to Ghost in the Shell and were mostly menacing (the ones at the start are a little too cute looking). 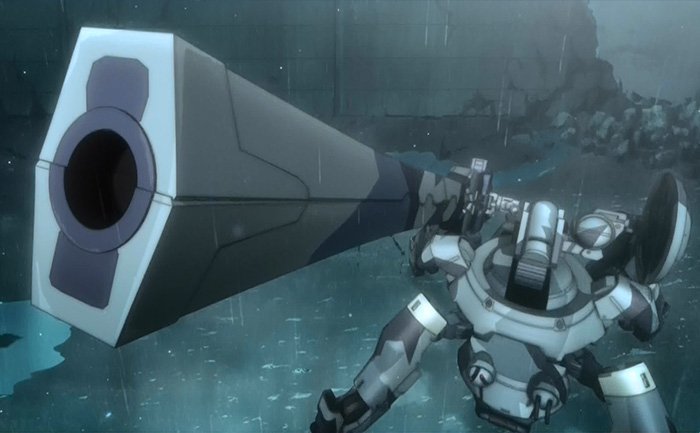 Interspaced through this entire journey you are afforded small glimpses into the protagonists’ backstory, the reason the planet is wrecked, and a few other minor details. This type of storytelling is always something I appreciate as it allows you to piece together some of the story on your own rather than just have exposition dumps or something equally as lame.

You may be surprised to learn that Planetarian was handled by David Productions. You’ve probably heard of them since they animated JoJo’s Bizarre Adventure and a show I looked at earlier, Ben-To. I was certainly surprised to see David Productions as the animation studio when I was doing initial research to write this up. It’s nice to know that they can handle more serious tone pieces like this.

The animation is great of course, but what is really impressive is all the detail and background work done for Planetarian. David Production nails the atmosphere and sets the tone perfectly for the story that is told here. It’s a bleak, broken, and empty world, and you can feel every depressing ounce of it.

Naturally, I recommend Planetarian. If you have about two hours to spare, and you are looking to see the potential that anime in the modern digital age can do, then you simply can’t go wrong because this anime really shows off the potential that ONA’s bring to the table. At the end of the day I ended up giving this a solid 9/10 because I just couldn’t stop thinking about it and Planetarian managed to really connect with me. On top of that, the technical aspects of the anime are deserving too. This is one that earn a coveted Seal of Excellence from me and an experience you really shouldn’t miss out on.

Now I just need to play the visual novel…

Let me know your thoughts on Planetarian and if you’ve played the original VN in the comments below. If you enjoyed this sort of article be sure to tell me. This article is dedicated to Patreon supporter Samuel C who donated earlier this month. Consider helping me out as well, every little bit helps after all! Just click the button below for more details. Thanks for reading and I hope to see you back here at Jon Spencer Reviews again soon!