Immediately, Skull will Grab your Attention or Turn you Away

The artwork for this game is absolutely stunning but don’t let that fool you. Skull is one tense, cut-throat bluffing game that is simple to play but hard to master. I haven’t done a board game review in awhile, so let’s dive in and take a look at this gem of a game! 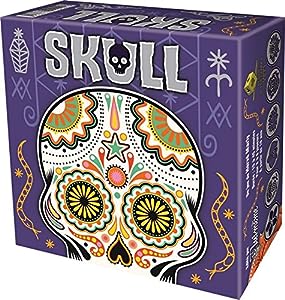 Playtime:  15-30 minutes (can go a bit longer depending on the group)

Previously known as Skull & Roses, Skull is a game with an interesting history. As the story goes:

August 12th, 1921:  we’ve finally reached part of San-Francisco, the last leg of our trip around the world, our souls enriched by the encounters we’ve had and our hold filled with the wonderful gifts offered by the people who have welcomed us. Among these relics is a surprising collection of flowers with a heady perfume, accompanied by beautifully decorated skulls, used for the worship of ancestors. During our travels, their fascinating presence has opened my mind, which is sometimes overly rational, to the rules of a captivating traditional game:  ‘The game of skulls.’

A surprising mix of bluff and strategy in which it is said that:  ‘whoever disturbs the rest of the ancestors by revealing their skulls will immediately lose one of their lives…’ Impelled by a mysterious force, I’ve immediately represented these skulls and flowers on a series of cardboard cards, then transcribed the rules. We’ve practiced the game quite a lot and have discovered with delight all of the subtleties which were required to become a winner. -Excerpt from the journal of Joseph, the author’s adventuring great grandfather (found in the rulebook for the game)

It’s a compelling story, but between the art and this, the game may not appeal to everyone. If you are a fan of bluffing and social strategy games, this is the game for you. There’s a lot to enjoy because this game can be played by just about anyone, has little downtime, and best of all, Skull is a game that is simple to learn but difficult to win. Let’s take a look at what’s in the box and how to play.

Inside you’ll find a set of four disks, one set for each of the six colors. Additionally, there will be matching cardboard squares for the disks that are important for gameplay. Outside of that, just a gorgeous box and a simple rulebook.

The goal of the game is to be the first person to both win a bid while flipping over enough flower disks, without flipping over a skull disk. Players have 3 flower disks and 1 skull disk. On your turn, you may place one of your disks on the cardboard square of your color. Additional disks may be placed on top of your current stack on future turns. At some point, a player will choose to not place a disk and begin the bidding phase.

Players take turns increasing the bid or passing. The bid may be increased by any increment at a time (so long as it does not exceed the number of disks in play). If you think a bid is too high, you may pass. Passing takes you out of the current bidding round. Once all but one player has passed, they begin flipping disks in play.

Starting with the top-most disk, the player who won the bidding round begins to flip disks from any player’s stack. If they manage to match their bid by only flipping flowers, they win the round. If they flip a skull, they instantly loose the round. Meaning, if a player won the bid at 5 they must flip over 5 flowers to win the round. 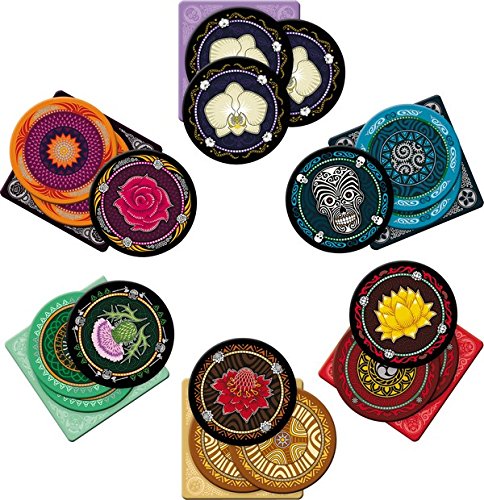 If the round is won, that player flips over their cardboard square and another round begins. The first player to do this twice wins the game. Rounds always start with the player that won the bidding round, regardless of if they met their bid or not. If a player is unfortunate enough to land on a skull, the must suffer a consequence by having a player randomly, and secretly, discarding one of their disks. If a player runs out of disks, they lose the game.

It’s a fairly simple game with a lot of hidden depth. Knowing when to place your skull disk out is critical to your success. Play it out too early and likely nobody will end up flipping it over. Play it out too late and you block yourself from having free flower disks to flip if you win the bid.

Each game of Skull is filled with tension as each disk flipped every round is a risk. It’s very easy to lose a round on your first flip, placing you at a huge disadvantage. It may not seem like losing a disk would be too big of a deal but going from 4 to 3 disks is a big deal, especially if you happen to lose the skull disk.

Fortunately, games don’t take terribly long and Skull is one of those games that is easy to play several times in a row if desired. Game time does increase with players, but not a whole lot. The game is best at the higher counts, but a three player game still offers plenty of excitement.

Their are only a few negatives for Skull. The artwork is going to put some people off to this game, but I hope that won’t dissuade you from checking this game out. Another negative is with people who have trouble bluffing in game. As this element is integral to gameplay, those with poor poker faces may not have a great time. However, it is possible to just randomly place your disks and bid blind. This way the bluffing element is negated for those who have an issue with it.

I highly recommend Skull. You can find the game fairly easily on Amazon, but I recommend picking it up at Coolstuff if you live in North America. The game is fairly cheap too at around $20 dollars at Coolstuff. Recommend for those that enjoy bluffing games like Sheriff of Nottingham or The Resistance but are looking for a game on the lighter side. Skull is well suited for family game nights or smaller get-togeathers.

Let me know your thoughts on Skull in the comments below and tell me what your favorite bluffing game is while your there! If you enjoyed the article or found it useful, leave a like to let me know I’m doing a good job. I hope to see you back here at Jon Spencer Reviews soon!

Jon Spencer Reviews is now on Patreon. Consider giving it a look by pressing the button below:

3 thoughts on “Skull – Beautiful to Behold, Cut-Throat in Play”