I can’t say that ‘The Green Mile’, based on King’s serial novel of the same name, is the greatest movie ever made, nor is it a masterpiece, but I’ll be damned if it isn’t the most heart-wrenching movie I’ve seen. Just the final moments of John Coffey (The late Michael Clarke Duncan, who received an Oscar nomination for his sympathetic performance), the prisoner of the Cold Mountain Penitentiary, who was falsely accused of killing two little girls, are enough to not only break your heart, but bring tears to your eyes. Add the fact that Duncan passed away a few years back, and you will really be crying.

Based on King’s short story ‘The Body’, ‘Stand by Me’ tells the story of four childhood best friends (Wil Wheaton, the late River Phoenix, Corey Feldman, and Jerry O’Connell) during the summer of 1959, as they go on a mission to find a dead body, while also bonding together. If you thought King only wrote horror stories, think again. While it does have a morbid theme about the search for this dead body, ‘Stand by Me’ serves as an emotional, and at times, funny testament to the unbreakable bond between friends, the joys, and even fears of summer. Also, let’s not forget how much this movie comes to mind when Ben E. King’s song of the same name plays on the radio. 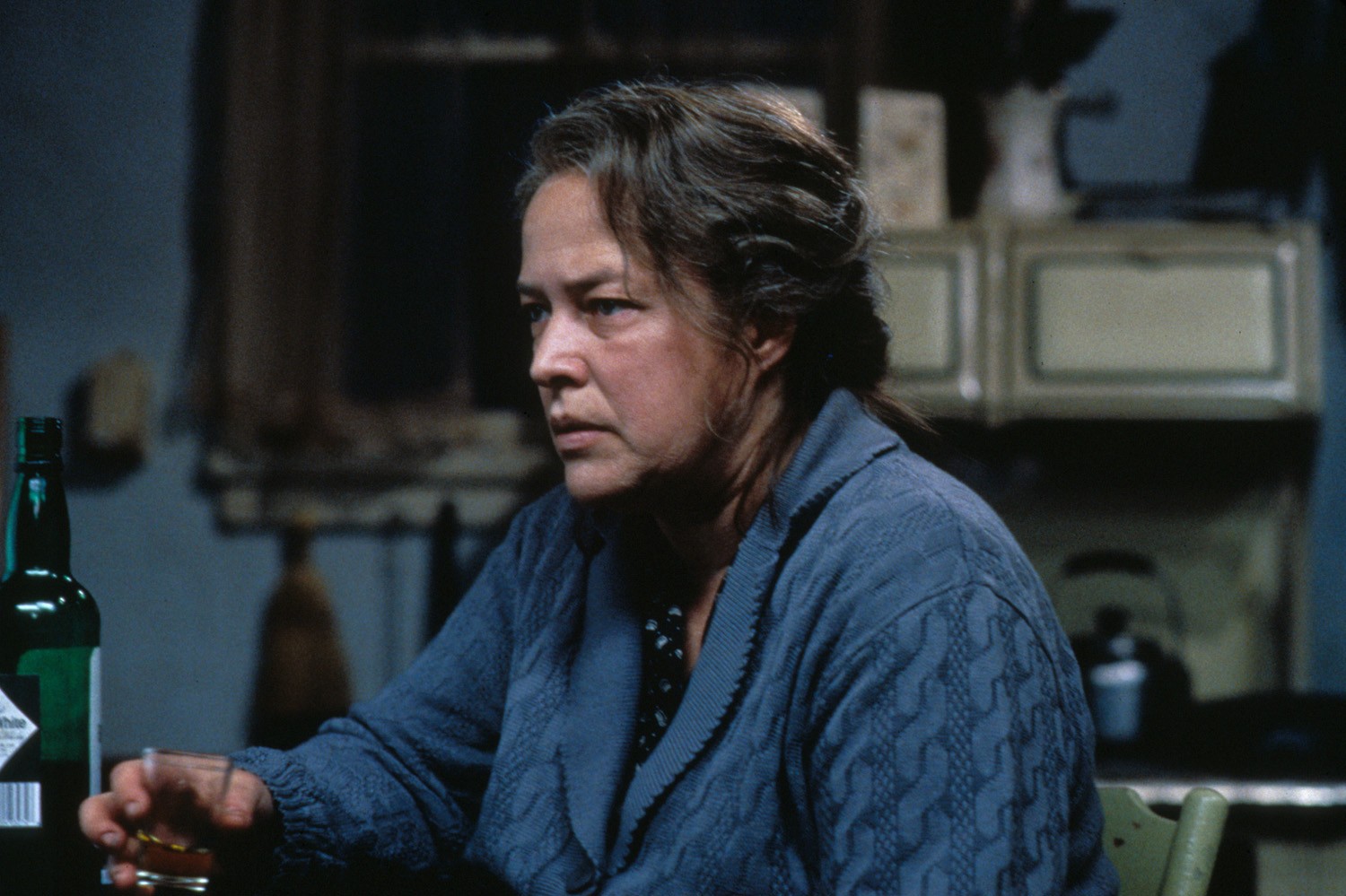 I will be honest with you all by saying that the Stephen King novel of the same name was a tough read. Not that it was hard to stomach or anything, but the book was extremely boring with its entirety being a trial where the titular character is just telling her story about what happened. The movie doesn’t really focus much on the trial if I can remember. (The only time I watched it was during my senior year when I had to contrast a movie over a book) It does focus a lot on Jennifer Jason Leigh’s character’s relationship with Dolores Claiborne, her mother (Kathy Bates). I can’t really say much, but this is the second movie where I appreciated Bates as an actress.

Another Stephen King movie I’ve only watched once in high school. ‘The Dead Zone’ is what I consider to be the best in Christopher Walken’s career. In ‘The Dead Zone’, he plays a man named Johnny Smith, who has visions of the future. I can only remember the psychic visions and the political assassination plot near the film’s climax, but I know that this is also a great film in Stephen King’s collection.

Unlike the rest of the movies on this list, ‘It’ was actually made-for-television, which meant that you couldn’t see all the graphic violence and sex, or hear the profanity that was present in the book. That doesn’t mean that I do not have an appreciation for this film (or mini-series as they call it.) What makes ‘It’ enjoyable is Tim Curry’s performance. Not only does he give the character of Pennywise the Dancing Clown dark humor, but it is a hoot to watch him dress up as a clown for two hours. 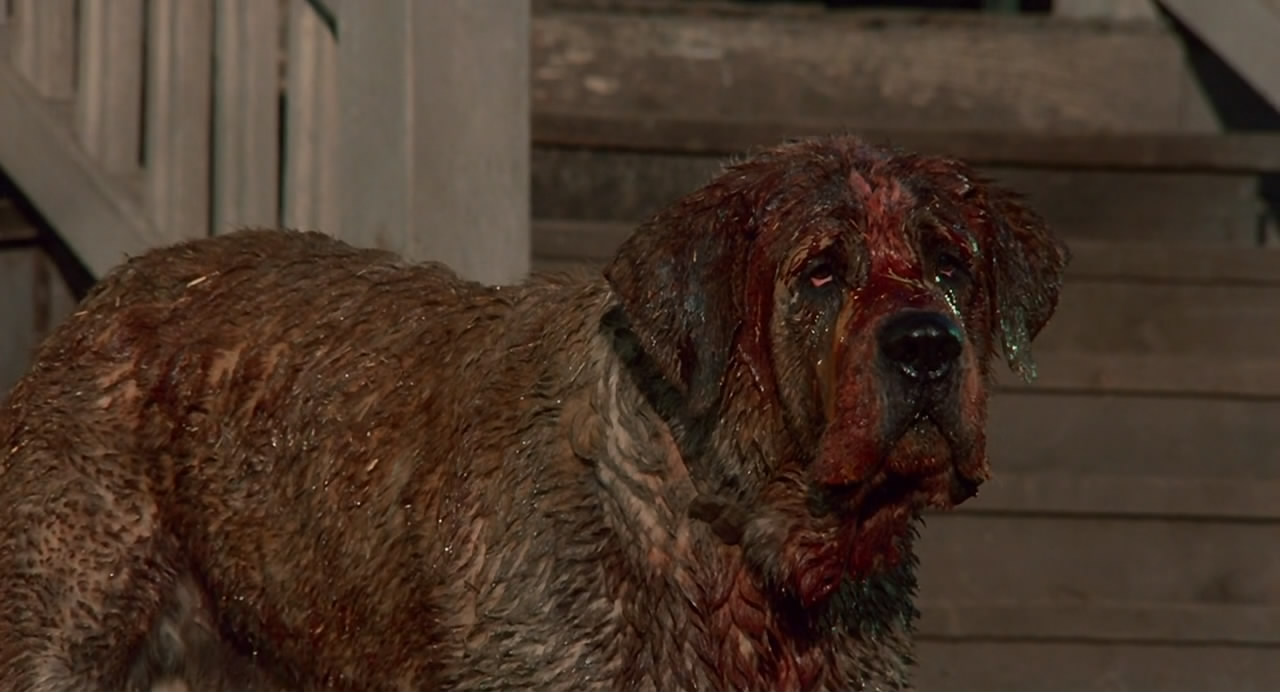 When it comes to St. Bernards, most people think of Beethoven. I, however, think of the antagonist in this adaptation of Stephen King’s novel that came out the same year. ‘Cujo’ is about a playful St. Bernard who digs deep in a hole, and gets bit by a rabid bat, causing him to become very sick and develop rabies, which turns him into a seemingly unstoppable killing machine. For the first act, ‘Cujo’ is a family drama dealing with a family of three and infidelity, but later turns into an adrenaline rush of survival as we are there with Dee Wallace and Danny Pintauro as they become trapped in Wallace’s broken down Pinto while dealing with Cujo. The second viewing made my heart beat faster than the first time I watched it. 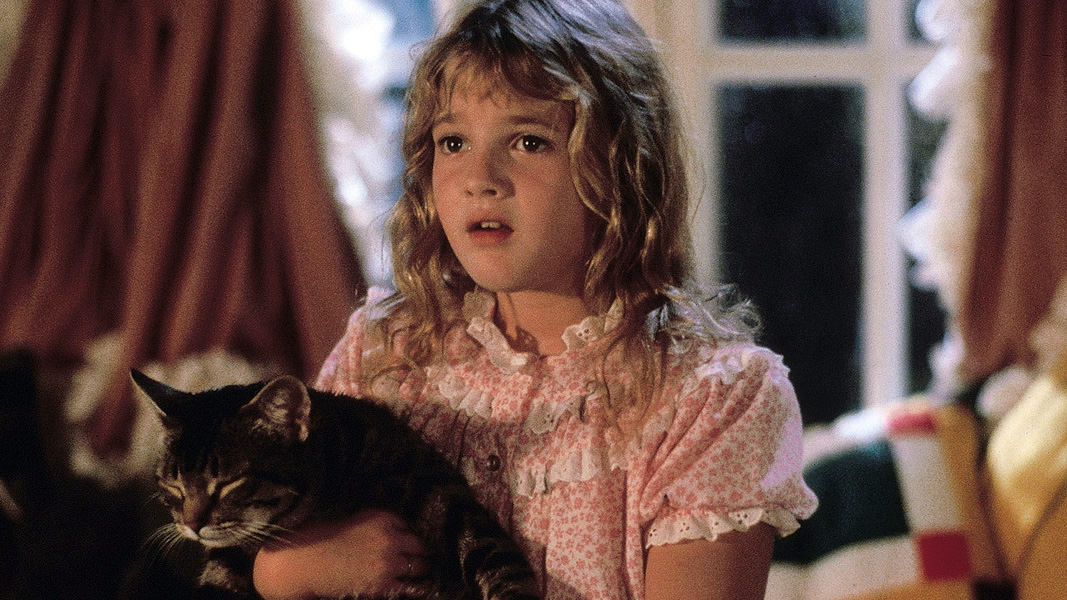 Based on three short stories by King; ‘Quitters Inc.’, ‘The Ledge’ and ‘General’. ‘Cat’s Eye’ centers around a stray cat walking from city to city in order to save young Drew Barrymore from a troll that only comes from her bedroom wall at night. The cat in this film is merely a plot device for ‘Quitters Inc.’ and ‘The Ledge’, while being a major character in ‘General’. It’s not the most popular film in the Stephen King collection, but I loved it when I first saw it in high school. I would watch it again if I had the chance. 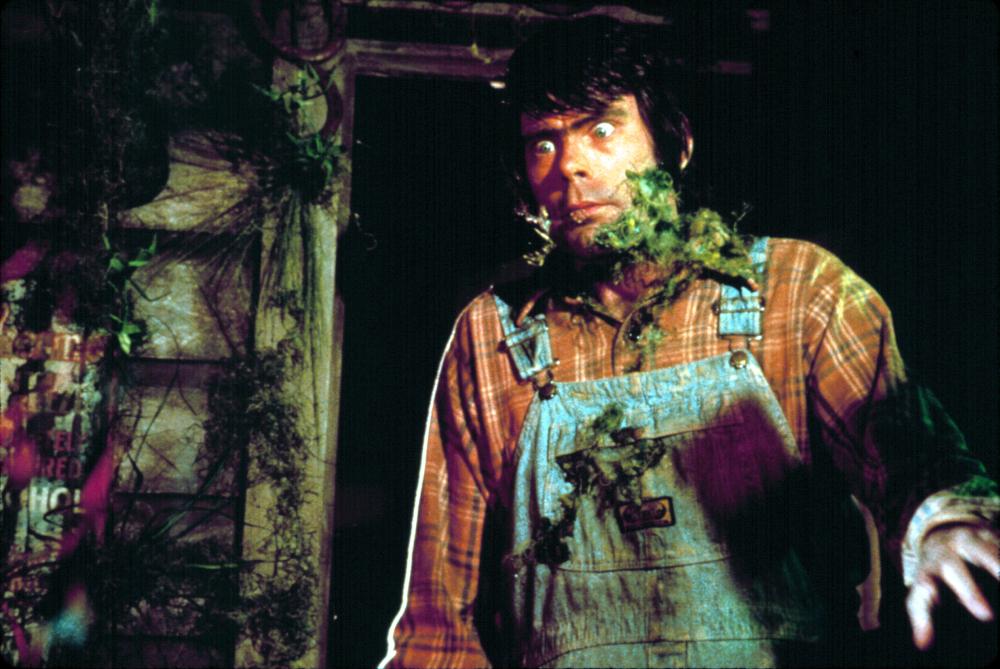 Years before ‘Tales From the Crypt’ was adapted from EC Comics to television, The late George A. Romero, and Stephen King paid homage to the ‘TFTC’ comic books of old; delivering fun, colorful comic-bookesque cinematography, and practical effects. Its intro even touches on the controversy of the EC comics of the 50’s with an abusive father preventing his son from reading what he calls “garbage”. Also, look for King’s segment where he plays a dumb farmer who gets contact with green goo from a meteor. 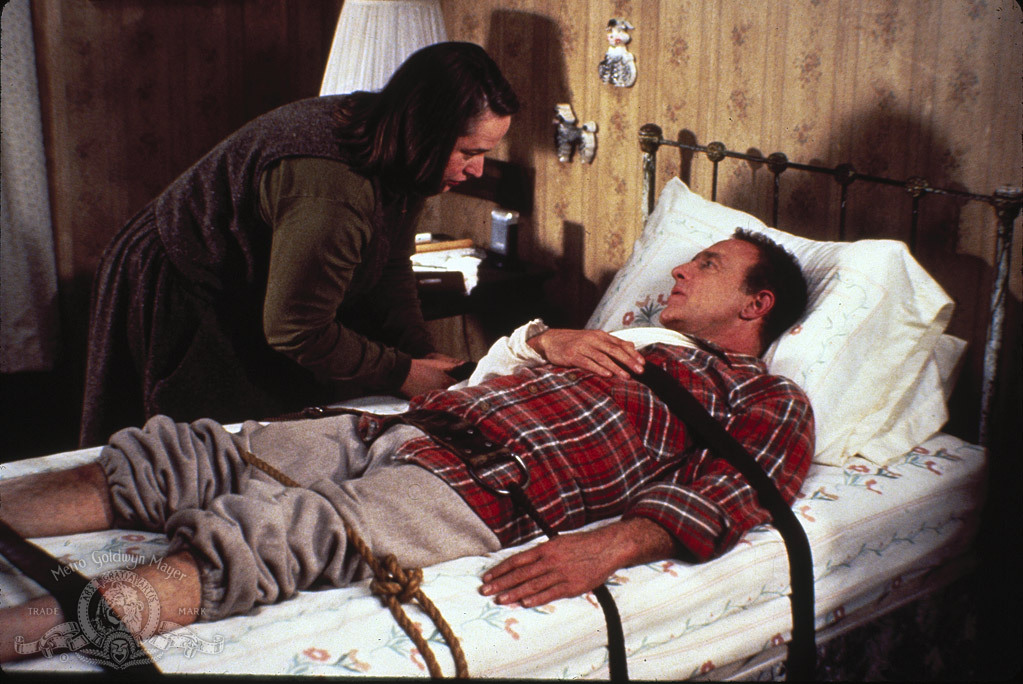 If I can remember, ‘Misery’ was not only the first Stephen King film I’ve watched, but it was also the first book I’ve read. I honestly thought the movie was going to be the scariest thing I’ve seen in my life. But that only comes from the trailer. Instead, it is more of a drama with suspense, humor, and fantastic performances by Kathy Bates as Annie Wilkes and James Caan as Paul Sheldon, the author she rescues. You know how Anthony Hopkins will always be known as Hannibal Lecter? The same could be said for Bates! Annie Wilkes is a testament to why I consider her to be one of the greatest actresses in film and the reason why she won the ‘Best Actress’ Oscar. 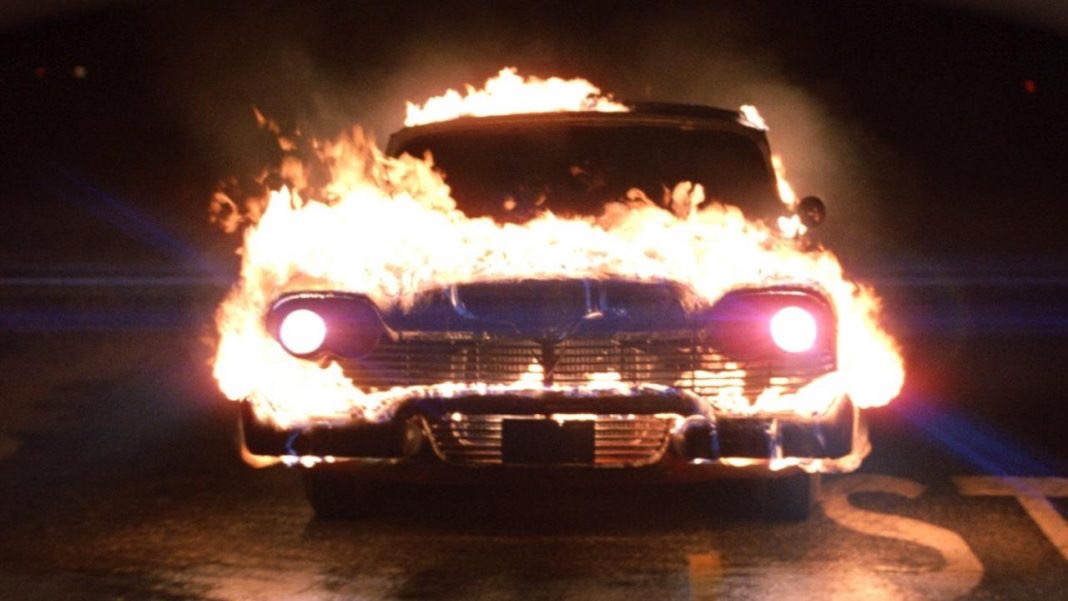 I was debating with myself whether ‘Misery’ or ‘Christine’ should take the Number 1 spot. I then thought to myself ‘Which film did I like better?’ I picked the latter. I admit that ‘Christine’ is not the perfect Stephen King film adaptation, and I do feel that the book was better. King’s novel depicted the graphic violence the film decided to skim over or tone down. What I like about John Carpenter’s movie is its eeriness; from its score by Carpenter himself to its supernatural elements, and dark atmosphere. Carpenter also includes a subtle character change in the lead Arnie Cunningham (Keith Gordon), with his performance being put as one of the most terrifying performances in film. Despite its flaws, I have a deep appreciation for ‘Christine’, which is why it takes the top spot on my list.

I feel that before I end this list, I should at least bring in my ‘Dishonorable Mention’!

‘Pet Sematary’ is what I call one of the worst abominations in cinema. Its screenplay and direction are ridiculous to no end, certain things don’t make sense, Fred Gwynne’s performance is laughable, and let’s not forget, its ending!