Warning: Content below contains spoilers for Sam Mendes’ Oscar-winning critical darling ‘American Beauty’. If you have yet to watch this film and are scared of spoilers, please turn away! Otherwise, keep going and enjoy this analysis! I am not responsible for anyone’s decision to tread such dangerous territory such as this!

Upon the first viewing of ‘American Beauty’, one may not see Lester Burnham (Kevin Spacey) as a likable protagonist, let alone, one you could easily sympathize with. Much like other characters in this dark satire of suburban life, Lester seems to have a despicable nature; his infatuation with his daughter Janie’s (17-year-old Thora Birch) overly confident best friend Angela Hayes (Mena Suvari) being the obvious target. That point may make him one of the most unlikable characters in film history, however, if one were to “look closer” – like the film’s infamous tagline says – one could see that there is more to this character than meets the eye, and possibly one of the most inspiring protagonists in cinema history. He’s not as just as Atticus Finch in Robert Mulligan’s adaptation of the Harper Lee novel ‘To Kill a Mockingbird’ (who I could say is the film character we should all strive to be in life.), or as sympathetic as John Merrick in David Lynch’s ‘The Elephant Man’, but Lester is the representation of a man who is stuck in the void of depression and monotony. He is a man who wants to get back on track to the life he used to have, yet is used to the routine of working at the same job for 14 years and being stuck in a loveless marriage for over 20 years that he can’t seem to find the inspiration to enjoy life again.

From the moment we are introduced to Lester, we don’t just see a man getting ready for work in the morning, we see a man who is depressed and isolating himself from the world around him. After his shower, he watches his wife, Carolyn, (Annette Bening) cut roses and complement their neighbors for their choice of fashion, from the outside of their bedroom window. It isn’t just the same old humdrum routine that makes Lester depressed and 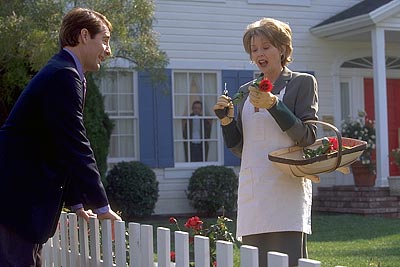 monotonous. (“In a way, I am dead already.”) Carolyn has grown cold and sexually frustrated, while he feels that their daughter, Janie, hates his guts, saying that they barely speak while dealing with her own self-esteem issues (as most teenage girls usually do.)

All that starts to change, however, when, during Janie’s high school basketball half-time dance routine, Lester starts to focus his attention on Angela, becoming instantly attracted to her beauty. This not only leads to sexual fantasies where rose petals have become a key element, but also an awakening on life. (“I feel like I’ve been in a coma for about 20 years… and I’ve just now woken up.”) This awakening starts to become motivation when, one night, he overhears Angela telling Janie how much she is attracted to him, causing him to work out everyday.  Much to Carolyn’s chagrin. 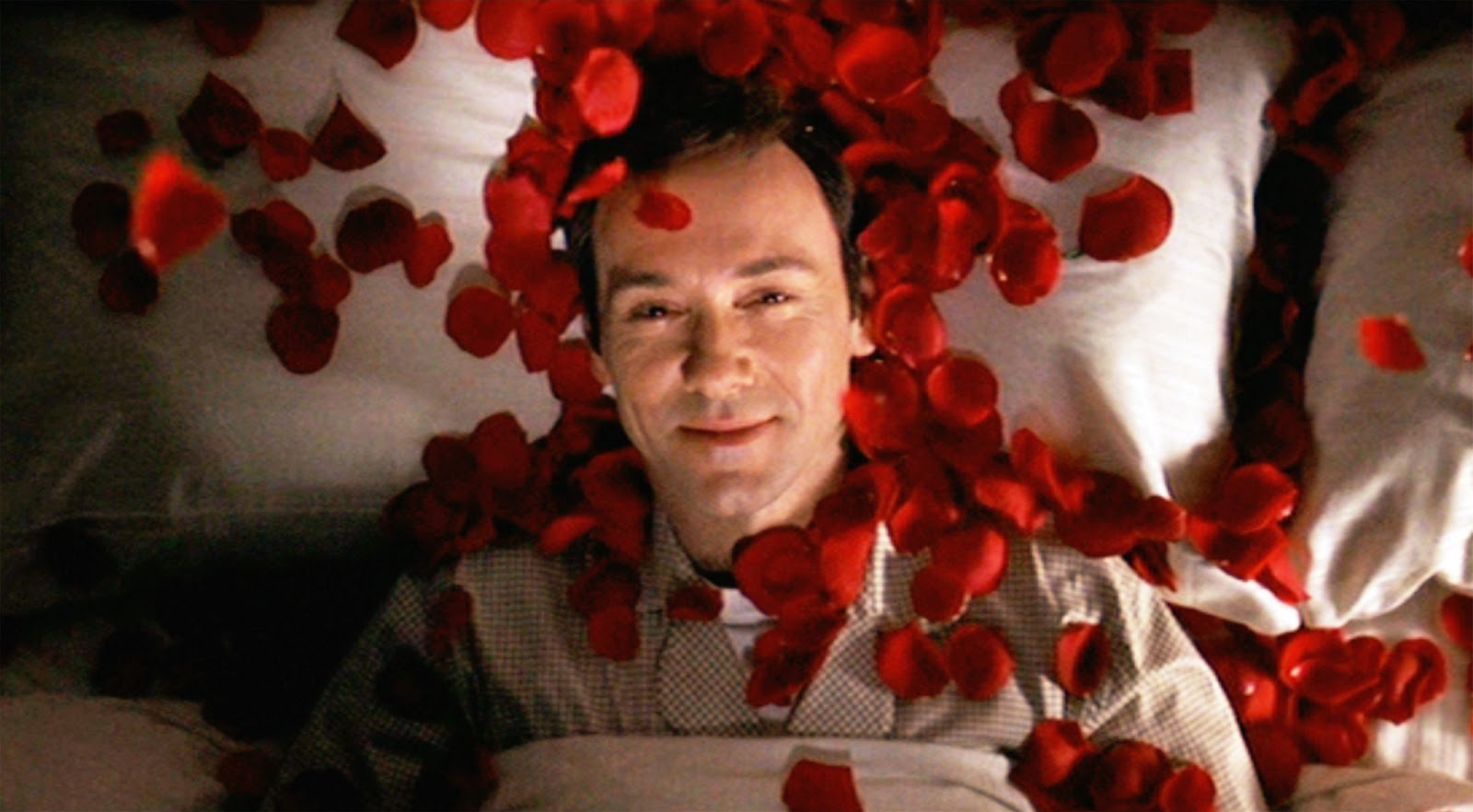 If you are still concerned with the thought of Lester being an inspirational protagonist due to his motivation being the affection of his teenage daughter’s best friend. I can assure you that ‘American Beauty’ doesn’t really focus on that element as much as, let’s say, Janie developing a romance with next-door neighbor (and Lester’s pot dealer) Ricky Fitts (Wes Bentley),  who finds the beauty in filming even the most horrifying things in life (Creepy!) while dealing with his homophobic army father Colonel Frank (Chris Cooper) and mother (Allison Janney), who is delusional; or Carolyn’s affair with her real-estate competitor (Peter Gallagher). Instead, Lester’s attraction to Angela is merely just a motivation for him to live life to the fullest and take charge of the life he felt he lost 20 years ago.

Besides lifting weights, and jogging with his gay neighbors who are both named Jim (Scott Bakula and Sam Robards) Lester decides to stand up to Carolyn by expressing his frustration for how he has been feeling (“I am sick and tired of being treated like I don’t exist….. I’m tired of this Lawrence Welk sh*t!), blackmail his boss for “almost sixty-thousand dollars! (Pass the asparagus!)”, buy the 1970 Pontiac Firebird he always wanted (“I rule!”) and even apply for a position in fast food (“I’m looking for the least possible amount of responsibility”) where he finds out about Carolyn’s infidelity in the most bad-ass way ever put to film. (“You don’t get to tell me what to do ever again.”)

In the beginning, Lester was stuck in a void he felt he could not escape, until his infatuation for Angela changed him to better his life, until he became content with and saw the beauty in his life. In the end, as soon as he and Angela are about to have sex, and she tells him she’s a virgin, he doesn’t even go through with it. Instead, he puts a blanket on her, fixes her dinner, and becomes the father figure he never felt he was to Janie, especially asking her how she (Janie) is doing in life. Minutes before Lester dies from a gunshot to the head, (which is what the film built up to.) he picks up a family photograph and says “Oh, man. Oh, man”. Not caring about the negativity that is coming behind him in his final moments. His closing narration even says that he could have been “pretty pissed off about what happened”, but was so caught up in the little joyful moment at the end of his life, that he only remembered what used to be the good times.

If there is anything that Lester Burnham teaches us at the end of his opening narration it would be that “it’s never too late to get IT back”. The “IT” in question being life. What used to be a life of boredom and depression has turned into a chance, an opportunity unmissed. Lester has lived his life to its fullest when it mattered most. To quote Lester “You have no idea what I’m talking about, I’m sure. But don’t worry…. you will someday.”

2 thoughts on “Film Analysis: ‘American Beauty’ – Why Lester Burnham is an Inspirational Protagonist!”