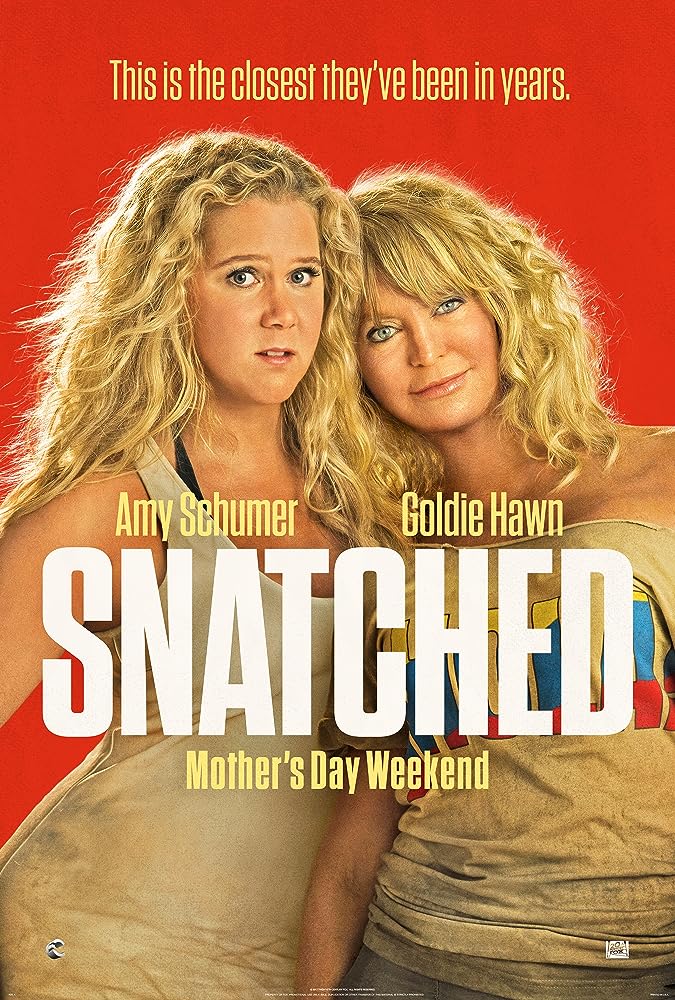 Today, I saw that the theater was packed with groups of people. I know that it is Mother’s Day, but for a comedy with mixed to negative reviews starring Amy Schumer and Goldie Hawn together, I was surprised. I was thinking that ‘Snatched’ was going to be a good time, especially seeing Hawn in a movie again after a 15 year hiatus. (her last film being ‘The Banger Sisters’ in 2002; an enjoyable movie where Hawn played a good role.) I did enjoy the way it looked and I did chuckle a lot, but some of the jokes in this comedy feel uncomfortable. The question being: How many people can we offend in an hour and forty-four minutes?

Schumer plays a recently single woman named Emily Middleton, who is going through a really bad day; having been fired from her job at a clothing department and getting dumped by her rocker boyfriend (Randall Park) in order to pursue the rocker lifestyle. Drowning her sorrows in red wine, Emily changes her relationship status, but in comedic reality, her mother, Linda (a 71-year-old Hawn) checks Facebook while going on a dating site to cheer her up by inviting her over to stay. Reluctantly, Emily does.

At Linda’s house are cats, and Emily’s agoraphobic brother Jeffrey (Ike Barinholtz), who calls Linda “Muh-Maw” (like how Stewie Griffin says it, but more irritating). This could lead to some funny jokes had the humor of the situation not been so discomforting to sit through. What Emily has planned to do over the weekend is to go on vacation in Hawaii, but can’t find a friend to join. So she has no choice but to take her mother, who isn’t sure about it, yet goes anyway.

Hawn and Schumer play the mother/daughter duo quite well, and most of the comedy relies on their chemistry. However, the jokes and chemistry are put to the ultimate test when we see Hawn reading pornography in order to keep calm as she and Schumer are both kidnapping victims. If you honestly thought that ‘Snatched’ was just a comedy about a daughter who can’t stand her mother, you are only half right. ‘Snatched’ is an adventure movie about escaping from kidnappers as Hawn and Schumer make joke after joke for shock value.

Schumer is a raunchy stand-up comedienne (infamously accused of stealing jokes from other comedians), yet Kate Dippold (who makes a cameo as a female shopper) wrote this movie, with Schumer as one of the executive producers. It feels as if Schumer herself wrote this movie with jokes involving rape, raunchy sexual humor, and cancer. There is also a scene where Schumer struggles to comply with a kind doctor’s request to get a CGI tapeworm out of her system, which comes from out of nowhere.

Compared to ‘Trainwreck’- also starring Schumer -‘Snatched’ is a more tolerable ride and gives us a likable mother/daughter duo. If anything, I would love to see Goldie Hawn make more movies in the near future.