Flowers of Evil, or Aku no Hana, is another ABC show that  had not seen prior it to it winning the vote. Through it’s 13 episodes run, I experienced the most bizarre coming of age story coupled with a self-acceptance story that I have seen to date. Most striking, however, was the music. You could almost get away with just watching the OP and ED of each episode (with a minor amount of context) and fully comprehend the narrative of this anime.

A quick heads up, I will be spoiling some of the story here so you’ve been warned. I’m going to assume that you’ve read the MAL synapsis as well.

Let’s look at the first OP “Aku no Hana -Kasuga Takao- (惡の華 -春日高男-)”  which I just call “The Green Opening.” Unfortunately, I was unable to find a video featuring the original OP animation with song, so we’ll have to make due with two parts. First, you will find an image of part of the OP below and then a video featuring the song (the video part isn’t important, just the audio). 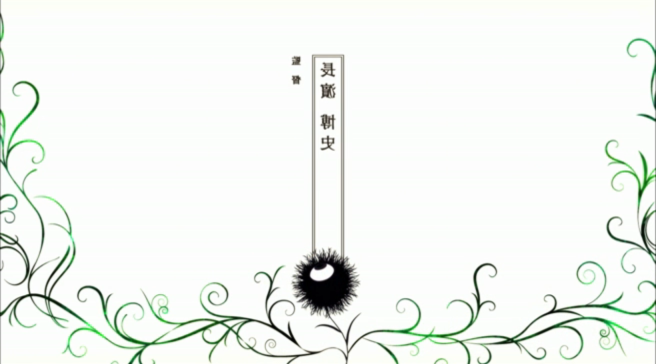 Now it may be hard to tell from the still, but the OP features fairly plain art with no real animation. It is just (what I think are) stanzas of Charles Baudelaire’s Fleurs du Mal (which you can view in full here), which this anime’s core themes and ideas revolve around. Lastly, take note of the green vines as they will be important.

When the first OP starts playing it is extraordinarily jarring. The show has a slow burn feeling to it with longer, lingering scenes. The upbeat energetic opening conflicts heavily with this tone. It is also critical that a male vocalist is singing the first OP, as this opening is meant to signify Kasuga’s arc and position in the show.

The show’s first opening is meant to convey that Kasuga is a relatively normal guy, with a fairly normal life. While it seems odd, the upbeat nature of the music establishes a sense of status quo and normalcy. The green trim of the vines denotes a sense of naïveté or innocence for Kasuga. He can still easily remedy his mistakes through this arc and the metaphorical “flower of evil” has not yet been able to take stable root in his heart.

Concluding each episode this ending plays. There are a couple of versions, such as one that sounds like a sexy tango, one with driving percussion, etc… or a total of 4. I couldn’t find each version so we’ll have to make do with the one I could find. The visuals aren’t the original, but since it is literally just a credit role, that part isn’t at all important.

One of the ED’s (though they all sound fairly similar)

This ED is extraordinarily unique in its sound and was a captivating part of the anime. It has a pervasive presence within the show, often competing with the voice actors until it eventually overpowers them. Considering the nature of the lyrics, which discusses the metaphorical flower, the fact that the ending invades a scene until it overpowers the actors is a great touch. While this does not always remain true of the ending, for this first arc this fact is fairly important to the overall narrative as it lends a sense of impending dread, uneasiness, and hints at the “flower” taking root in our characters.

By time episode 4 has rolled around the OP has changed over to “Aku no Hana -Nakamura Sawa- (惡の華 -仲村佐和-)” which indicates a shift in the show’s tone and direction. The vocalist is now female and almost sounds like she’s screaming the lyrics as opposed to singing them. This time, the lyrics focus on perversion spewed franticly off-key at the viewer. It’s almost as if we are baring witness to a slow decent of madness, but the song stops just shy of that.

Obviously, this song is meant to represent Nakamura’s perspective. By episode 4, the anime’s narrative is almost entirely under her control. The previous idea of a hopeful resolution to the misunderstanding at the beginning has become so warped and far removed from being a possibility at this point.

Lastly, the only other change in this OP is the trim of the vines has gone from a green to deep purple. This adds to the intensity of the lyrics and implies a level of perverse passion that has become distorted, as well as somewhat off-putting. Through the 4th to 6th episode this is something the viewer is going to see a lot of, which keeps in line with the opening’s core themes.

Moving to the third OP, used for episodes 7-9, “Aku no Hana -Saeki Nanako- (惡の華 -菜々子佐伯-)” things have taken a more normative turn. This is what we dubbed the “romantic comedy opening.” Things seem to be getting back on track. The song is a lot calmer compared to the other two and the soothing blue trim adds to this.

I don’t have much to say about this opening at first. It’s out of place initially, but its true nature becomes much more clear after the events of episode 7. I’m going to briefly switch gears here to address that.

The conclusion of episode 7 is by and large the best part of the series. The culmination of everything finally erupts and we are left with a lasting impression and striking sequence. Instead of the standard ED, we get a more romanticized version that fits the episode extremely well.

Moving back to the OP, as things develop, the out of place feeling becomes more intense. Saeki is just as unhinged as the other two focal characters, despite her outward appearances. It’s subtle, but becomes obvious by episode 10.

Episode 10 forgoes any opening song. Instead the viewer is met with a black title card with white writing. That’s it. Another turning point in the series, all three parties are gathered together in a dramatic fashion. This is where the series sort of “concludes” so to speak. Now, there are more episodes and it ends proper, but things cannot continue the way they have prior to episode 10 any longer and this “silent” OP is the best representation of that. The characters have lost their way, the tone is dramatic, and this is how things needed to be.

OP 4 is the strangest of all. “Aku no Hana -Gunma-ken, Kiryu-shi- (惡の華 -群馬県桐生市-),” is a jumbled mix of the previous opening songs. The trim is even a mix of all of the colors to make this more clear. Let’s take a listen.

By now things have reached the breaking point. After the resolution of episode 10, the state of things are a mess. It’s a jumble. The direction, unclear. This opening has an uneasiness about it. The carnival sound makes the OP seem almost maddening and menacing all at once. By now, it should be clear which parts are indicative to each character.

It’s a unique idea that I haven’t seen in a lot of anime before.

After walking through the music, it makes the narrative of Aku no Hana more obvious. Again, the OP’s and ED’s are almost enough to entirely understand the story which I find fairly fascinating and wish that more shows would express narrative through its music.

Before I finish up, let me touch on a few points that I didn’t get to mention yet.

The narrative for this anime is slow. It crams a lot of stuff in its runtime though, which is impressive. If you watch this, have some patience, because the slower pacing of the show is deliberate and important.

Animation wise, the show looks ugly a lot of the time. This anime was done fully rotoscoped, which is very unusual. While it may not always be pleasant to look at, this adds to the atmosphere of the show. The way things move and look are unnatural feeling. Typically, animation is fairly fluid and smooth in other shows, but here it is almost jittery and inconsistent in a way that plays up the unsettling nature of the anime.

Note that Flowers of Evil deals with some sensitive topics. The show is dark, but at the same time it never got as dark as many make it out to be. I was ready for where the show wanted to go, but unfortunately was unable to. You see, Flowers of Evil was meant to be a 2 season show but stops at the end of this season.

At the end of this season, there is a wild flash of images that show what was meant to be in season 2, or part 2, of the story. Unfortunately, this second season is probably never going to happen since the show did not perform well. The ending of this season is complete though. It ends in a satisfying way, but still leaves the viewer wanting more.

The image flash is very impressive though. It was enough to have myself and “The K’s” look up where the show would have ended up going. Wow. It’s a shame that season 2 will likely never happen because things get pretty intense. Reminded me a bit of Higurashi even.

At the end of the day, if you can get over the visuals and slower pace, Flowers of Evil is a solid show that is well worth your attention. I give the show a solid 9/10 ratting, losing some score solely for a certain aspect of the ending and a few minor (and I mean minor) gripes. I give this show a buy it recommendation, as it leaves enough of an impression that it would feel right at home amongst any collection.

Naturally, you can watch this show for free over at Crunchyroll. If you are looking to buy the show, you can do so at your favorite online retailer as it is licensed by Sentai. Personally, I recommend Righstuf for your anime needs as they are fantastic. They have Flowers of Evil on DVD and Blu-ray. Fortunately, this title goes on sale at Righstuf fairly regularly, so recommend holding off on a purchase until then. You can usually get the title for about $10 bucks if you do as apposed to ~$40.

Have you seen Flowers of Evil? What are your thoughts on the show, did you notice the narrative in the music, or not? Let me know in the comments below as I would love to hear your thoughts! Remember, if you enjoyed this article please leave a like and I hope to see you all back here again soon!