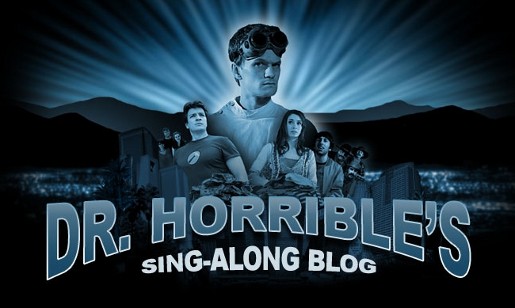 I have a fond love for ‘Dr. Horrible’s Sing-Along Blog’ starring Neil Patrick Harris as the wannabe title villain with a dislike for society. But as I was watching with a friend, I came to the realization that Joss Whedon’s 42-minute musical has an eerie connection to last year’s election. As ridiculous as it seems, this analysis is pure speculation and fan theory. Today, I will talk about the three acts, the mini-series’ characters and how they connect to last year’s controversial presidential election (Now that Donald Trump is president anyway). Let’s get started!

Characters and their Presidential Counterparts:

Our first comparison between character and presidential candidates is the comparison between Dr. Horrible (Neil Patrick Harris), Senator/former Democratic nominee Bernie Sanders, and Democratic presidential nominee Hillary Clinton. You might ask me why I chose two candidates to compare a wannabe super villain with. Like I Lay’s potato chip, I couldn’t have just one. On a serious note: If you watch Act I (Which I’ll delve into later.), you get to see a bit of a similarity between the two Democratic nominees and Dr. Horrible. The mindsets of both nominees are in Horrible’s brain. He has the mild-mannered sense of a humanity that has gone chaotic and wants to change the world, much like Sanders. He wants people to stop giving in to the lies that a leader has given them. Like Sanders, he is the voice of reason in a world filled with what everyone calls “Sheeple”. To talk about his mindset of Clinton, he is perceived as a villain, in the way that a lot of people see Hillary. He wants to rule the world and destroy his opponent by pointing out the negative flaws that makes his competition unqualified for the position of a leader. I will delve into the comparison much more when I explain the acts in detail.

As you can see, this comparison is, in no doubt, pretty obvious. Both of these guys are the example of an unqualified leader. Captain Hammer (Nathan Fillion) is an egotistical character perceived as a hero (much like Trump sans the “Hero” part.) They are both unfiltered, boastful, proud, not afraid to talk about their penis size (Ex: Hammer: “These are not “The Hammer”. The hammer is my penis.” Trump: “And he referred to my hands — If they’re small something else must be small.”), and will make fun of those who he sees as lower than he is.

Penny (Felicia Day) is a lot more kinder than the usual careless Trump supporter. But they both see hope and change in what may seem to be a lost and dying world. If Penny and Captain Hammer weren’t together, then I would compare Penny to the American voter; showing us kind and caring people who just want to make their voices heard and help in any way they can.

Moist (Simon Helberg), much like Gary Johnson and Jill Stein, have purposes and want to help out. But prove to be pointless in the end. (Moist’s ability to be wet. Jill Stein and Gary Johnson’s limited publicity and the two-party system belief.)

The Story and How it Compares to the Election

This is the part where I tell you the story and how it eerily compares to the election. Whether you believe it or not, this is just a matter of speculation and is not meant to be taken too seriously. This was just something fun to do. Also *SPOILERS FOR DR. HORRIBLE ARE BELOW! YOU WERE WARNED!!!

Act I – The Rise of Sanders, Trump and Clinton.

I have already compared the characters to their counterparts, but Act I is similar in the way Dr. Horrible wants to rise to power, in the same way that Sanders and Clinton have their motivations for being candidates. (Already explained above.) The series starts off with Horrible reading e-mails sent to him by fans (Not compared to how Clinton deleted hers.) The first act shows how Dr. Horrible wants to reach out to Penny and strike up a conversation (Hillary and Bernie swaying voters.), and how he aspires to get into the Evil League of Evil (The White House). It cuts to Billy Buddy trying to plan a heist by putting a honing device onto a van filled with Plutonium for his freeze ray (Sanders supporters casting their ballot for Sanders.). He is eventually stopped by Penny and they share a conversation that results in their motivations for accomplishing their tasks (Casting their votes). As soon as the heist is set in motion (the vote is cast), in comes Captain Hammer to stop him. (In this case, campaigns for Trump and Clinton). Hammer pushes Penny out-of-the-way of the van into garbage. The act ends with Captain Hammer and Penny striking a romance and Dr. Horrible heading home feeling upset (In this case, Americans are left with just Trump and Clinton, with Sanders out of the poll.)

Act II – The Fall of Sanders, the Voice of the People, and the Dawn of the Debates.

Act II begins with Billy Buddy singing a song about how the world is messed up and the failed romance with Penny (Sanders supporters feeling devastated that their candidate is out of the picture). The scene after that begins at the laundromat where Billy Buddy finally gets the nerve to strike up a conversation with Penny, despite not being interested in her interests. They talk about Penny’s date with Hammer with Billy giving hints on how bad Captain Hammer is. (Two different sides explaining their opinions on why they voted for who they did, with one party feeling uninterested in the other’s opinion.) Later, Dr. Horrible gets a call from Bad Horse explaining that in order to finally get accepted by the Evil League of Evil, he must kill someone (This is where the idea of a debate sets in). But he can’t figure out who. Until the next day at the laundromat, he (as Billy Buddy) learns that Captain Hammer is showing up there to pick Penny up. In one hilarious joke, Billy says “Oh, look at my wrist. I’ve got to go.” (In the same way that Clinton supporters find ways to delete Trump supporters off of their Facebook.). After Hammer shows up, they get into a conversation, with Hammer knowing about Horrible’s alter ego, and the reveal that he is dating Penny solely to get back at Dr. Horrible. This gives Horrible the idea to kill Hammer, in the final song of act II “Brand New Day”. (If you stop to think about it, this is very similar to when Trump has said harsh and sexist things about women, giving Clinton the idea to destroy Trump’s chance at winning the election by putting out negative ads to win.)

Act III – What if Hillary won?

Before I start this part of the analysis, I just have to mention that this is all a theory (and a way to tie this into the comparison.) Act III begins with the musical number “So They Say” which explains that Hammer is giving a speech at city hall about the homeless and the new shelter that opened up. (News coverage on the debates between Trump and Clinton). At city hall, as Hammer is giving his speech, he brags about how he and Penny had sex as well as how bad the homeless are. (Compare that to Trump’s shocking comments about his daughter, women, and the time he mocked a disabled reporter during one of his speeches.). But what Hammer doesn’t know is that Dr. Horrible has appeared to the convention as well, hiding under the covering of Hammer’s monument (which has been replaced with his Freeze Ray.) and momentarily freezes him in his place while telling the people (in song) how stupid they are for supporting Hammer (Hillary pointing out Trump’s flaws during the debates.) But as Dr. Horrible goes in to kill Hammer with his Death Ray, the Freeze Ray depletes and Hammer gives Clinton a punch (The Popular Vote vs. The Electoral College).

From then on, the end of ‘Dr. Horrible’s Sing-Along Blog’ is the beginning of the theory of Hillary’s victory.

Captain Hammer almost kills Dr. Horrible with the Death Ray until it automatically explodes (Trump thinking he has the upper hand until the votes are in and Clinton is determined the winner) leaving Hammer to writhe in pain and cry home to his mommy (Trump complaining on his Twitter about the election being rigged.) Dr. Horrible gets up and is distressed to find a dying Penny with shrapnel from the Death Ray impaling her (Compare that to how Trump supporters are hurt at the results of Hillary’s win.) But hope springs when it turns out that Penny’s death results in Horrible’s acceptance into the Evil League of Evil (Hillary’s victory leading her into the White House). The film ends with Horrible and Moist committing crimes (A theory on what would happen if a Hillary Presidency happened) and finally entering the doors of the ELE. The scene ends with Billy Buddy at Dr. Horrible’s blog. (Compare that to how American voters would say “What have I done?!”)

‘Dr. Horrible’s Sing-Along Blog’ is very interesting when eerily compared to the 2016 election. Whether you believe it or not, I couldn’t help but explain the theory of how this three-part miniseries almost predicted the election (sans the ending having a different touch.) If you feel this is as interesting as I think it is. Share this note on Facebook for your friends to get the word out and start conversation.

2 thoughts on “Where ‘Dr. Horrible’s Sing-Along Blog’ Fits into the 2016 Presidential Election”