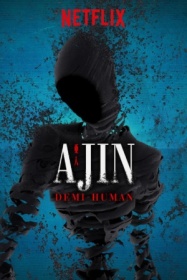 However, every now and then CG and 3D animation is necessary for budgeting, time, or practical reasons. In Ajin’s case, the show is fully done in this manner. While it isn’t always the prettiest in terms of animation, Ajin did manage to capture my attention with its intriguing cast and provocative narrative. Was Ajin a forgotten masterpiece of the 2016 Winter line up, or something that was rightfully passed over by most of the community?

Ajin is a Netflix original anime that received two 13 episode seasons. Animated by studio Polygon Pictures, really not known for much else outside of Knights of Sidonia, this studio seems to make 3D anime exclusively. When this originally aired in 2016 I was curious about it but didn’t get around to it until recently when some winter weather blew in. So far I’ve only completed season one so that’s all that will be discussed this time with an article for season two sometime in the future when I get the chance to finish the show.

What is immediately obvious when watching Ajin is the CG work. Sometimes it’s really good and other times the animation seems to lag and the characters feel jittery and unnatural in their movements. For this reason, a lot of people probably dropped this pretty quickly when it first aired. However, these moments weren’t all that often and they were not too hard to overlook after the first episode or two.

While many people in the anime community have expressed that shows like Ajin and Knights of Sidonia are bad simply because of the non-traditional animation method, I disagree. Take RWBY for example, which is a popular Western fully 3D animated show that has received a fairly high degree of success. From many perspectives this animation method makes sense for Japanese studios to consider as a viable avenue for future and current productions. In other words, Ajin may be a hard sell due to how it’s animated but don’t let that take away from what it has to offer.

Getting back to the show itself, the anime follows Kei, Nagai a boy who wants nothing more than to live a normal life. However, he soon discovers that he is an Ajin, a person who cannot die and his life becomes (you guessed it) anything but normal. Now in pursuit by the government, Nagai will do anything he can to return to living an ordinary life.

At least that’s what he says. Eventually Nagai meets Satou, also referred to as “The Man in the Hat” who is also an Ajin. He originally claims to want the same things Nagai wants, but is actually looking to start a war between the humans and Ajin. It’s a pretty standard setup as far as anime goes, but it’s presented with a lot of intrigue and is paced well enough that by time it gets fully into its own that this isn’t an issue.

Through Satou, Nagai learns what the government does to captured Ajin. The humans treat Ajin like animals and conduct inhumane experiments on them. Some characters even openly object to this and more are obviously uncomfortable about it despite not saying anything. This does a good job of showing that the audience really shouldn’t be rooting for either side once Satou’s true agenda gets going, but it buys a great deal of sympathy in the moment.

Even after that, he still decides to pursue his original goal. While all of this is going on, there is a pretty strong focus on this government guy and his lady companion (who is also an Ajin). These characters play an important role in season one but are mostly relegated to supporting cast for the moment. It seems that the show is really setting up for a betrayal with these two characters since the guy treats the Ajin girl pretty badly.

The season concludes with an exciting plan that Satou orchestrates to begin his war against the humans. I won’t spoil what happens but the last few episodes were easily the best ones. They reminded me a lot of Terror in Resonance mixed with a modern FPS video game. That’s probably a weird way of putting it but it’s the best way I can describe the conclusion without going into details.

Story-wise, there is a lot of focus on the supporting cast and Nagai doesn’t decide to actually get involved until the end of season 1. This may bother some people but there was enough going on that this wasn’t an issue. It isn’t like Nagai decides to do nothing when sitting on the sidelines, he does experiments and learns more about being an Ajin. This is useful to the audience still and allowed for some interesting plot developments so it wasn’t like any time was really wasted.

One thing that may be worth noting is that some have stated that Ajin is the show that Tokyo Ghoul wanted, and should have, been. This isn’t a totally unfair comparison. Ajin is definitely the better show but if the ideas and concepts intrigue you in Tokyo Ghoul then Ajin should be a no-brainer since it shares several similar themes in what it means to be human among several others.

Strangely, there was a point where Nagai felt like a different character in the story. He’s shown to be obviously smart from the get go but he becomes a more Lelouch (Code Geass) like character about halfway through the series. This felt a bit weird and is really my only complaint outside of the occasional silly writing moment or laggy animation.

Speaking of Lelouch, Johnny Young Bosch voices the Nagai in the dub and man is it obvious. This may have played a part into why that bit in the middle felt out of place but it’s hard to say for sure. The voice work provided by Johnny and the rest of the cast was solid. The only voice I wasn’t completely sold on was Satou’s. I have no clue who voiced this guy but his voice work doesn’t always fit the character. Satou’s voice is a bit too gravely, it isn’t easy to explain, but I suspect that some people may be bothered by his character’s English performance as a result.

The opening for Ajin is titled “Yoru wa Nemureru kai?” and was one that I never skipped. It was infectiously catchy. This is the best video I could find, but give it a listen.

The ending theme wasn’t really anything special for me. Outside of this, the background music was just kind of there. I didn’t notice it much so it was average at best.

For this reason I give Ajin’s first season a soft 8/10 with the recommendation to watch it. Currently, you can only do so if you have Netflix but I’m hoping this will get a home video release sometime in the near future. Depending on how season two goes, the rating bumps up to a recommendation to buy it once it becomes available. I suspect that season two will be just as good if not better based on how things have played out so far so here’s hoping. I’ll get a review of season two up sometime in the future so look forward to it!

What were your thoughts on Ajin? Let me know in the comments below. Leave a like if you enjoyed this article and consider following my blog for more stuff like this. Hope to see you around!