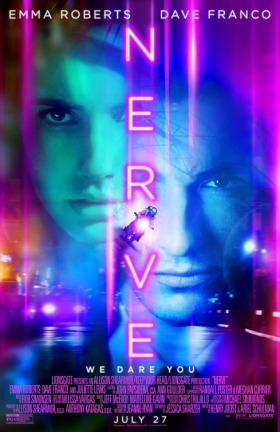 What looks like a hipster Indie film on the outside turns out to be a teen romance disguised as a PSA on the dangers and humiliation of internet challenges this generation of teenagers are used to doing. With each new craze/trend to follow, a price has to be paid; ‘Nerve’ is a perfect movie for this generation to see with its satire on these internet trends and the popularity of mobile apps, but tries to deal us the cards of horror, thrills, awkward comedy, fast-paced action, and a predictable/unnecessary love story that we as moviegoers are kind of used to when it comes to film adaptations of young-adult novels with an ending that doesn’t really work. I’ve mentioned in my last Facebook status that I’ve never read the novel by Jeanne Ryan (I’m not much of a reader, to be honest.), but after seeing the first trailer before ‘Popstar: Never Stop Never Stopping’, I was really interested in seeing this movie.

I’m sure that ‘Nerve’ was targeted for teenagers (the auditorium I saw this movie in had a couple of groups of who I believe to be teens as the only audience members.), but I have a peaked interest in films that have a neon-color style to them; ever since I first saw ‘Spring Breakers’ back in April of 2013. ‘Nerve’ definitely has that style, and the poppy/electronic soundtrack itself made me feel like looking up the album on Spotify (I haven’t really found it yet.), but sitting there, I wasn’t sure how to feel as I was watching.
I can tell you that ‘Nerve’ is worth a watch for its done-before-by-’13-Sins’ premise where teens join a popular online game described as “Truth-or-Dare, minus the ‘Truth’” named ‘Nerve’ in which- when first starting -people can choose to be either a “Watcher” or a “Player”. This game doesn’t interest high school senior Vee (Emma Roberts), at first. But after being pressured to get out of her comfort zone by popular best friend Sydney (Emily Meade), she reluctantly accepts, despite the warning of her caring male best friend Tommy (Miles Heizer). During the game, she runs into a handsome young man named Ian (Dave Franco), who also happens to be playing the game. At first, the challenges sound embarrassing and harmless (“Kiss a stranger for five seconds”, “Try on this dress”, etc.), but as the watchers set up more dares, our protagonists and many other players face life-or-death situations just to get to the top of the rankings.
‘Nerve’ tends to focus on its romance plot quite often and tries to tweak it in a ‘Cabin-in-the-Woods’ way (which would be no problem, if it wasn’t predictable.). When we get to the challenging life-or-death dares, the film gets thrilling and during those moments, I had my hand covering my mouth with tension even if I knew the outcome of the situation. The performances during the dramatic moments really shine; especially Meade, who does a great job. For what it has, ‘Nerve’ is one of those summer movies that is, for the most part, kind of good.

One thought on “‘Nerve’ Film Review”