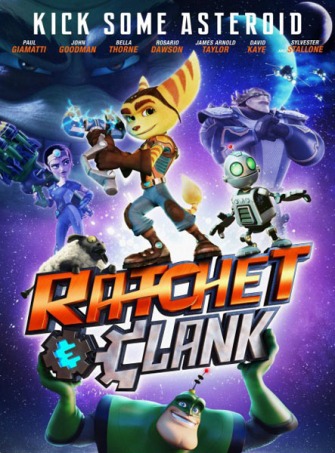 I’ve only played maybe one of the ‘Ratchet & Clank’ games years ago and I have always imagined childhood memories turning into movies and how they would turn out; luckily, ‘Ratchet & Clank’ is a breath of fresh air despite holding a 20% on Rotten Tomatoes. I really enjoyed this film for its crisp and colorful animation, sense of meta-humor, in-jokes and PlayStation Easter eggs for the fans to laugh at and enjoy.
Based on the video game franchise, ‘Ratchet & Clank’ tells the story of a Lombax named Ratchet (Voice of James Arnold Taylor); he disappoints as an inventor and wants to prove himself by joining a team called The Galactic Rangers led by the egotistical Captain Qwark (Voice of Jim Ward), a superhero he idolizes. At first, Qwark doesn’t let him join the team which includes technical adviser Elaris (Voice of Rosario Dawson), trigger-happy Brax (Voice of Vincent Tong), and bad-ass Cora (Voice of Bella Thorne). He ends up getting the chance when he uses one of his failing machines with the help of an intellectual robot named Clank (Voice of David Kaye), to save the team from an army of robots led by robot Victor Von Ion (Voice of Sylvester Stallone). Sent by Chairman Drek (Voice of Paul Giamatti), who plans on killing the rangers so Drek can de-planetize all empty planets to make a new one with the help of member-turned-enemy Doctor Nefarious (Voice of Armin Shimerman).
‘Ratchet & Clank’ looks exactly how a video-game movie should; animated and beautiful to look at. While I would complain that the animation at times looks incomplete, it manages to impress me with its style. I was skeptical about seeing this film, because I thought that it would cater too much to children. At moments it does get sidetracked with nonsensical humor and a message about true heroism that may seem a little preachy, the jokes are still spot-on as well as its satire of science-fiction tropes. I had an extremely good time with ‘Ratchet & Clank’ and I liked the voice casting; I forgot to mention John Goodman as the voice of Ratchet’s guardian/mechanic Grimroth, he did fine and got some laughs.
Character-wise, my problem revolves around the way Clank was executed. I felt his backstory was a little forced. I almost thought the film would go downhill when it detracted from a certain plot point/cliche. I do praise ‘Ratchet & Clank’ for giving me a good time. I also have a good feeling that both fans and children will enjoy it. Very impressive for a PlayStation film!