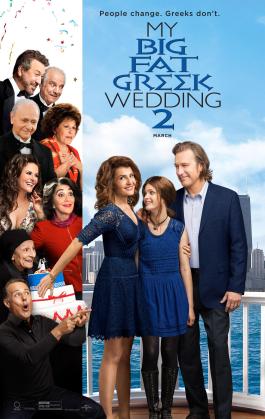 Nia Vardalos looks like she hasn’t aged much since the first ‘My Big Fat Greek Wedding.’ The first film happened 14 years ago and was based on a one-woman show that she did, which Tom Hanks thought was a good idea and called her up to let her know he wanted to produce the film version. The movie happened to be one of the highest grossing movies of all time, but since the 2010’s are a decade where everybody is making cast reunions with films like ‘Dumb and Dumber To,’ ‘Fuller House,’ ‘Zoolander 2,’ etc. Vardalos decided to write the idea for a sequel with Tom Hanks still being a producer of the film. Disappointingly, I enjoyed the first film better.
Vardalos once again plays Toula Portokalos, a Greek woman who is still dealing with the hell her family is giving her; if one member of the family hears some shocking or exciting news, they tell the whole family and/or show up to either celebrate/plan or lecture, with patriarch Gus (Michael Constantine) telling everyone he can, the history of how words descended from Greek origin. Her sister, Athena (Stavroula Logothettis) is still making babies, her grandmother, Mana-Yiayia is showing up in random spots for whatever reason, while the rest of the family certainly hasn’t changed. Toula is also unsatisfied at how hard she tries to be a great mother to her daughter, Paris (Elena Kampouris), but feels like she’s failing; she is also looking for ways to spice up her marriage with her principal husband, Ian (John Corbett).
The family still proves to be a burden for Toula when Gus wants Paris to not end up like her mother at age 30, but instead to “find a Greek boy” and marry him. Toula tells her it’s okay to marry whoever she wants. What also makes it harder for Toula is that Paris is going to apply for a college far away from her Greek life; not only that, but Gus finds out that he was never actually married to Maria (Lainie Kazan), Toula’s mother. Thus begins a rush to get the two married once and for all.
I first watched ‘My Big Fat Greek Wedding’ a couple nights ago and I thought it was a clever and charming romantic comedy; ‘My Big Fat Greek Wedding 2’ loses its charm with a story that could have been something else. This sequel could have taken the ‘Dumb and Dumber To’ route and become the same movie, but with Paris getting married (I would have preferred that over its actual plot). I’m glad it tried to avoid the doing-the-same-movie-twice route and gave us a new story; sadly, the story not only is touched on enough, but it just doesn’t work for this movie and takes away the point of the first film.
The family is actually the best part of the movie, with Aunt Voula (Andrea Martin) giving us Greek jokes here-and-there. Nikki (Gia Carides), Angelo (Joey Fatone), and Nick (Louis Mandylor) give off the laughs. I actually chuckled most of the time watching, but I really could not immerse myself into its story. ‘My Big Fat Greek Wedding 2’ tries to have its wedding cake and eat it too, but the reception didn’t turn out as well as the first ‘My Big Fat Greek Wedding’.