This is film review 12 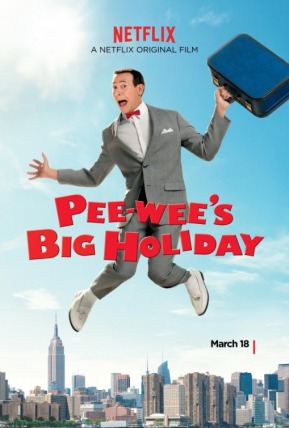 Pee-Wee Herman does not age at all, both figuratively and literally. He still has his charm, his looks and childlike behavior we are so used to seeing back in his ‘Pee-Wee’s Playhouse’ years; and there’s no one who can play him better than Paul Reubens. Audiences were first introduced to Mr. Herman in 1981 as a stand-up act, years before Jeff Dunham introduced his puppets to the world, on an HBO stand-up special that was played late after parents put their children to sleep. The character was so popular with audiences that Warner Bros. wanted Reubens to write a film titled ‘Pee-Wee’s Big Adventure.’ This was a family-friendly theatrical film about the love between Pee-Wee and his bike, which one day gets stolen by a rival/bully of Pee-Wee Herman. Not only was it Tim Burton’s first theatrical film, it was also so popular that a sequel was made called, ‘Big Top Pee-Wee’ which showed Pee-Wee Herman helping a carnival get back on track was made.
It took years to finally get Pee-Wee Herman back on screen, as small as it may be. Now Netflix has given us ‘Pee-Wee’s Big Holiday’ and it definitely is a welcome back for the beloved character. Is it meant for children when compared to ‘Big Adventure’ and ‘Big Top’? If you’re the type of parent that doesn’t cover your little kids’ eyes during a scene where Pee-Wee is taken hostage by three criminals with switchblades who end up inviting male strippers for a sexy pillow fight (No nudity involved), then yes. That being said, this isn’t really for the youngest of children; kids however will enjoy the childlike humor and wonder of Pee-Wee Herman himself. From its beginning, where he drives in an overlong/wonderful scene similar to the “Breakfast Machine” sequence in ‘Big Adventure,’ to its touching end.
‘Pee-Wee’s Big Holiday’ feels like it should be released in theaters, but looks like its made for television, and Netflix seems to be competing with channels like HBO and Shotime for uncensored, commercial-free entertainment. Now they’re making movies to inspire more internet hoppers to use their product for home entertainment. Yet most of their films aren’t as compelling or entertaining as I thought. Luckily, with ‘Pee-Wee’s Big Holiday’, I felt like a child myself, and this movie feels like one of those juvenile guilty pleasures that you can’t help but enjoy.
‘Pee-Wee’s Big Holiday’ takes place in the town of Fairville where Herman resides; he spends his mornings picking apples for the townspeople and going to work at a diner, where he surprisingly does a good job as a cook (Hell, if Spongebob Squarepants can work as a fry cook at The Krusty Krab, then it’s time for Pee-Wee to work too). His life changes when Joe Manganiello (as himself) comes into the diner; they click right away and Manganiello invites him to take the day off and leave Fairville for Manganiello’s birthday party in New York. Herman reluctantly accepts and decides to leave for the first time (Didn’t they forget he left before in ‘Big Adventure’?) for days of fun and adventure.
Eventually, he gets caught up with the three runaway criminals I’ve mentioned above (Jessica Pohly, Stephanie Beatriz, and Alia Shawkat), a pilot (Diane Salinger) who convinces him to live dangerously, a backwoods mountain man named Grizzly Bear Daniels (Brad William Henke), the amish, and many others as he tries to reach New York in time for the birthday party.
‘Pee-Wee’s Big Holiday’ has moments where it feels like ‘Big Adventure’ and almost forgets the last two movies existed; not to mention, each film was directed by someone different (Burton on ‘Big Adventure’, Randal Kleiser on ‘Big Top’, and now John Lee on this film.). Surprisingly, Judd Apatow produces this film along with a bunch of people including Reubens. With that being said, I thought it was going to lean more into adult territory (which I mentioned earlier that it does.) But not a single F-word or sex scene comes on sight. Innuendo, maybe. However, you have to remember that once you take away a character’s reputation for entertainment, it suddenly becomes an offensive turn-off (Let’s hope Paul Feig’s female-lead reboot of ‘Ghostbusters’ doesn’t do the same.). Thankfully, ‘Pee-Wee’s Big Holiday doesn’t take that route and instead focuses on the childhood understanding of Pee-Wee Herman as he sets on the road.
At times, especially during its third act, it tends to get ridiculous. But remember: It’s a Pee-Wee Herman film, so you’re going to get a little juvenile. It’s not like ‘The Ridiculous 6’ (another Netflix film) where it relies on toilet humor to get a laugh. I enjoyed ‘Pee-Wee’s Big Holiday’ and can’t wait for more home entertainment from Netflix. Welcome back, Pee-Wee Herman! We missed you!