This is film review 4 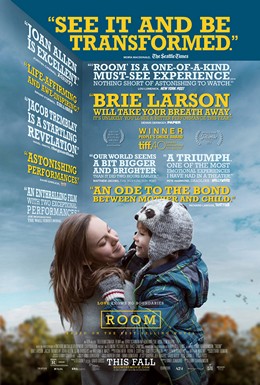 Out of all the ‘Best Picture’ nominees of this coming Oscar season (which I’m very excited to see with my friends very soon at the amazing Pix Theatre), ‘Room’ is my pick for the top ranking by far. I didn’t see ‘Mad Max: Fury Road’, and I am waiting to see ‘Brooklyn’ hopefully soon. No other film in this category has captivated me more than this movie. ‘The Revenant’ was an intense look at a man fighting the elements; ‘The Martian’ proved that Matt Damon can enjoy life; ‘The Big Short’ and ‘Spotlight’ almost put me to sleep; but both stories felt real and had clever writing with two very different tones, with ‘The Big Short’ being comedic and ‘Spotlight’ showing us a world of shock; while ‘Bridge of Spies’ didn’t impress me much, but ‘Room’ is something special.

For the first half, ‘Room’ takes place in a secluded shed owned by a creepy man called “Old Nick” (Sean Bridgers), where Joy (Brie Larson in her first Oscar-nominated role) does her best to stay positive with her recently-turned five-year-old curious son, Jack (Jacob Tremblay, in an Oscar-worthy performance snubbed/forgotten by The Academy). Joy and Jack have been held captive by Old Nick for years. Joy was kidnapped at age 17, while her son was born in that shed and only has been taught knowledge of the shed and not the world. During this half, he is bound to ask questions which makes him disbelieve his mother’s stories about the outside world.

They’re stuck in that shed until Joy gets an idea to have Jack break free. The plan works and they both escape their captor. But being in that shed for seven years gives Joy a new attitude which threatens to ruin her family life. While Jack is given a new sight on what the outside world is like.

To some people, ‘Room’ would be a bore with its first half. It’s a quiet and tense movie at times. But its that quietness that gives you a chill, as if something is not right in that shed. Could Old Nick come back anytime? What will be of Joy and Jack? Will they ever escape? The cinematography and extreme close-up shots also give you a sense of claustrophobia and suspense. This is categorized as a drama, and not a thriller. However, this film is a scary and devastating sight to see. Additionally, the way Joy describes everything to her son gives you a feeling similar to that of a horror movie.

I have to talk about the performances. Everybody did fantastic in their roles. Brie Larson is more than just a pretty face, she is a force to be reckoned with. While Jacob Tremblay does fantastic as Jack. He knows how to take instructions from director Lenny Abrahamson, who also does a great job directing this film. Tremblay also gives you the right emotions a kid should feel when dealing with these situations. Why didn’t he get a nomination, Academy Awards?! William H. Macy and Joan Allen do great as Joy’s parents. Mostly everybody does a great job making this movie feel real. The world is not nice and ‘Room’ shows us that, but it also gives us a sense of hope that things will turn out better. Evidenced by the fantastic score, ‘Room’ is a hopeful movie.

Even though I’ve never read the novel by Emma Donoghue, I absolutely loved ‘Room’ from its tense and quiet opening with scenes told from the narration of Jack, to its final moment that gives us a feeling of hope. ‘Room’ is another great movie from 2015 and one of the best films of the past year. DO NOT miss this amazing movie! You will absolutely love it!