This is part 2 of a 4 part series meant to give some ideas for those looking for last minute gift ideas, or just interested in discovering some cool games. If you haven’t checked out part 1, which is a list of recommended children’s games and that sounds interesting, then I encourage you to check it out.

The rules for this list are that I will not repeat anything off the children’s games list, though some of those games could cross over onto this list if it weren’t for this rule. This list, just like the last one, is not in any particular order. Recommendations will range in complexity and what age groups the game is best suited for.

Duck! Duck! Go! is a whacky game about rubber ducks racing in the bathtub. It’s silly fun that actually has a lot of depth to it. However, the game isn’t very complicated which is partially aided by its theme.

If you know the old game, Robo Rally, then this game may seem familiar. Both games capitalize on programmable movement, which is a game mechanic that is not often used. Programmable movement means that players decide simultaneously how their piece will move, once all players have decided, they reveal and turns are resolved based off of an intuitive order on the cards. This can cause the best laid plans to go awry, resulting in silly fun.

While Robo Rally had a much more complex movement system and much harsher results when plans didn’t go accordingly, Duck! Duck! Go! is quite forgiving and significantly easier to learn.

Players use this movement mechanic to race their duck to various buoys (objectives) on the board. The first to get them all and get back to the “finish drain” wins. 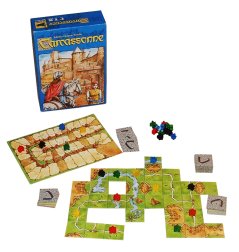 In Carcassonne players are trying to get the highest score possible by playing a single tile on their turn and assigning meeples (player pieces) to various spots on the board in order to score. The game play is straight forward, with easy to understand scoring mechanisms (except the farmer, that one can be confusing).

On a players turn, they draw a tile from the stack and place it onto the board. Tiles fit together to form a picture and must match on all sides when being placed. The player then has an option to deploy a meeple for potential points. Play continues in this fashion until the tile stack runs out. Whoever has the most points at the end wins.

Carcassonne was one of the first board games I initially got into. I’ve had a blast playing it with friends and family alike. It’s not a particularly challenging game, but it does require some thought and strategy. While you may not have control of what tile you’ll get, you need to be mindful of where and when you deploy a meeple in order to score the most points.

You can find Carcassonne on coolstuff.com for $22.99 for the base game. It has many expansions which add more rules and tile sets to the game, but they are completely optional.

Jamaica is a great game for larger families, or those who can muster a player count closer to 5 or 6. While the game is still good at lower player counts, it’s not nearly as much fun when it’s at or around its max.

Players take control of a pirate ship with the goal to be the first person to cross the finish line, while also having the most gold. Players do this by first rolling two dice. One is assigned to the “day” slot, and the other to the “night” slot. Players then select a card from their hand. The cards dictate how many spaces a player may move, as well as food, gunpowder, and gold. Each card has two symbols to represent these things in the corresponding day and night spots. The dice determine exactly how much of each thing you get based on which dice are placed on the day or night spot.

While this may seem confusing, when you have the game in front of you, it’s very simple to understand. This game is a little bit more complicated than the other two games that have been on the list so far though. However, it really does make for an excellent family game that can be played with nearly anybody.

Jamaica is available at coolstuff.com for 39.49, which may seem expensive, but the price is well justified by the quality of the components and the stunning artwork.

4. Letters to Santa (AKA Love Letter) 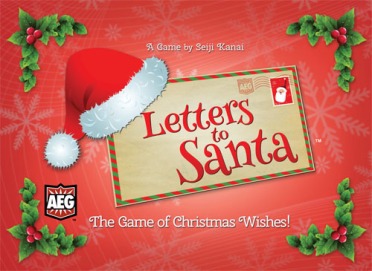 Letters to Santa is re-theming of the popular game, Love Letter. I’ve reviewed the regular edition on my site and it can be read here. It’s a fast fun and fast paced card game that can be played in a short amount of time.

I recommend this version simply because the holiday season is upon us, making this game perfect. However, there are several other versions of the game that are available with different themes. Each version is more-or-less the same in terms of game play though.

Love Letter has serviced me well in all settings. It works well with friends, family, regular game groups, and even strangers. The game is well rounded and fun, so I highly recommend it.

Letters to Santa (or any version of Love Letter) can be found at coolstuff.com for $7.29. 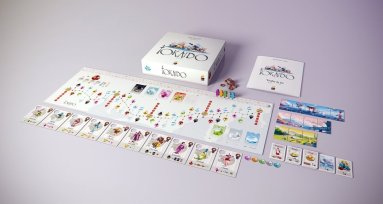 Tokaido is a relaxing, but competitive game about traveling across Japan. The game features beautiful artwork, simple rules, and is just a joy to play.

Players control one of several travelers as they attempt to have the most fulfilling journey to Tokaido. Play is unique in that whoever is furthest behind goes first. Players may move as far as they wish, but each space they pass is an opportunity to gain a more fulfilling journey. Carefully consider where you want to go, and where others may be heading themselves.

The player with the most points at the end of the game wins, as it is deemed they have had the most fulfilling journey. On the surface, this game may seem more involved than it actually is. The game took me about 20 minutes to read through the rules once, and then I had the game down for life. The game has a wide appeal in its theme, as well as being simple enough to teach in a few minutes, while still being engaging and requiring some thought.

Tokaido can be purchased at coolstuf.com for $26.49.

Games can be a great time to spend with you family, and this is a great place to start. It can be difficult to find a game that works for your family, or someone else’s.  Hopefully this list had one game that will work for you and your family. A great family game that I didn’t mention? Agree or Disagree with my list? Let me know in the comments below.