This is a series of recommendations for those seeking ideas last minute ideas this holiday season. Each part will cover a different category with 5 games per category. Remember, this list is just the tip of the iceberg and is meant to give some ideas, not be comprehensive (we’d be here all day!).

For this list, I’ve selected games that are specifically aimed at kids. While these games may be played as a family, kids are more than capable of playing these games without much help from adults (granted an adult may have to help teach the game initially).

Lastly, the list is in no particular order. This list contains games for kids as young as 4, while the upper limit could even be adults. Again, these games work better for kids, but some can still be great games for adults too. 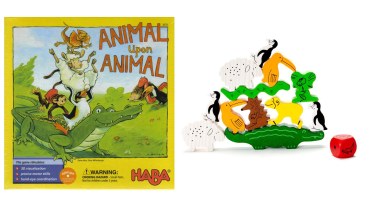 This is easily Haba’s most popular game. Haba produces children’s games, and while all are pretty unique and interesting, this fun dexterity game would be my top pick from this company (Plus I didn’t want to have a list of just Haba games).

In this game players must race to stack their pile of wooden animals first. A die dictates how many and where these animals can be placed. The game works well with kids, even as young as 4 years old. As a bonus, this game helps kids develop hand-eye coordination and fine motor skills.

This game retails for $18.99 on coolstuffinc.com. 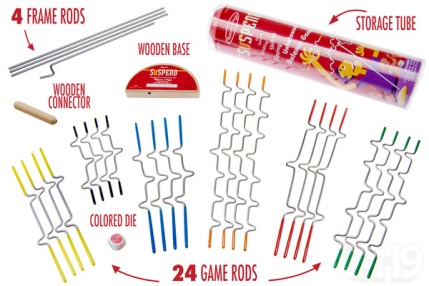 Another dexterity game, but this time coming from the minds of Melissa & Doug. These creators of both children’s toys and games, have really hit it out of the park with this one.

Offering 4 different ways to play, players must balance the differently colored and shaped rods without having the structure collapse. This game is a step up from the previous game in that it’s significantly more difficult. With that being said, it’s still not frustratingly hard. The kids I have played this with enjoy it both as a game, and as an activity/challenge (trying to stack all the pieces on their own for example). 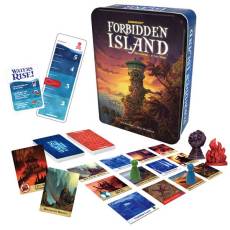 This game is a bit of a cheat for the list, since it could double as a family game. I choose to include it on this list specifically for older kids. The game is fully cooperative and can be played with as little as one person.

The players must recover 4 artifacts from a sinking island to beat the game. Each player is a unique character that helps the team in accomplishing their goal. Players must work fast or risk getting swallowed up with the island.

Once an older child has got a hang of this game, they can teach it to younger children and facilitate a game of it. Being fully cooperative, the players must work together against the game to win. The game teaches vital teamwork, communication, and cognitive skills while still being fun.

Some of you may remember that I’ve featured this on a list once before. That list can be found here. The game is available at coolstuffinc.com for $11.99.

Recommended Age Group:  8+ (May go as young as 6 depending on the child)

Crazy as it may seem, Fantasy Flight has actually made a children’s game. What’s even more crazy is that it isn’t massively complex with thousands of little pieces.

Let’s get the one negative out of the way first, you have to randomly assemble the board EVERY time. This can be tedious and not very much fun. Some kids enjoy doing it, others don’t. If that kills the game for your kids, then go ahead and move on to the next game because I even find it somewhat obnoxious.

With that being said, the game is really solid. Players move their penguins in a straight line on the board collecting fish. As they collect fish, the board begins to develop holes, or in some cases, even creating multiple boards. The photo above is an example of a board state mid-game.

The game requires thought, making it better suited for older kids. However, I’ve had success with kids as young as 6. Again, the board assembly is the biggest complaint with the game, but otherwise kids really love this game and it’s theme.

Let’s end this list with a classic. Don’t Break the Ice is a game that I loved as a kid. My sister and I would play this game for literally hours. As an adult, it’s obviously too simplistic, but it’s one whooper of a kids game.

The board is made up of a base with “ice” pieces fitting into it. One of the pieces has a spot for the red bear on it. Players then take turns knocking out pieces of ice without the bear’s piece of ice falling too. The player that makes the bear’s ice fall is the looser.

Hopefully one of these games would work for a kid in your life. Board gaming is an excellent hobby for all ages, but it can be difficult to know where to start. A great kids game that I didn’t mention? Agree or Disagree with my list? Let me know in the comments below.